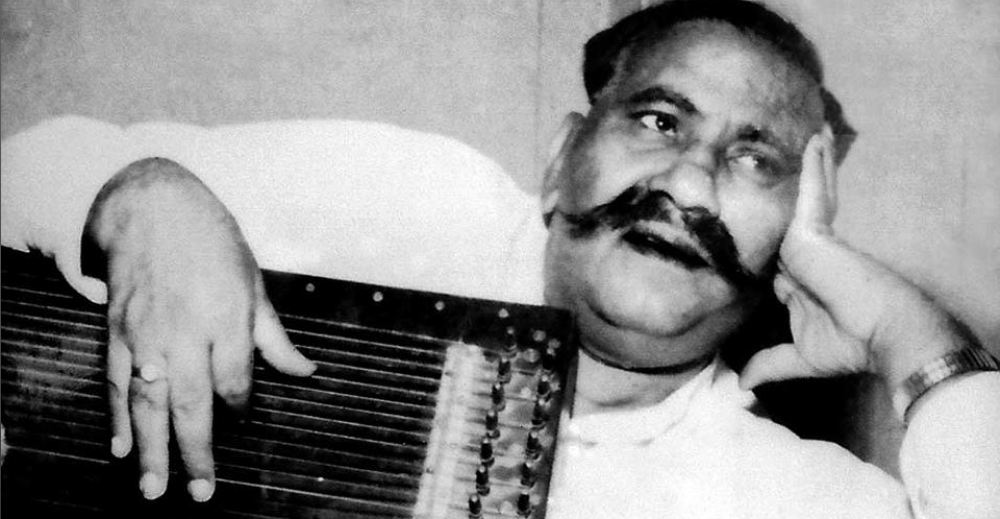 A sense of arrogance, a big moustache, a Hercules body and a Surmandal kept beside…  A look at him and it is hard to believe that this person can be related to music in any way. But as he would start singing, all would be left spellbound. Such smoothness, elasticity and melody running in the voice on all three octaves, that it left the listeners speechless. Yes, it is indeed difficult to describe the singing talent and the unique personality of Ustad Bade Ghulam Ali Khan in words. The maestro who belonged to the Patiala Gharana will remain a music legend for generations to come.

Bade Ghulam Ali Khan Saheb sang every style of music from Khayal and Dhrupad to Thumri, but he gained most popularity for singing Thumri.

You would have heard some of this Thumri for sure. These Thumris in the voice of Bade Ghulam Ali Khan Saheb have become immortal now.

A Thumri sung by Khan Saheb, ka karun sajni.., became so popular that an easy version of this was sung by Yesudas and used in the film ‘Swami’ later.

Bade Ghulam Ali Khan was born in the British period in Kasur, a district in the state of Punjab, which is now a part of Pakistan. It was the year 1902. His father Ali Baksh was a well known singer. Therefore his training began at the tender age of five. At the age of seven, he began to be trained in both singing and Sarangi from his uncle Kale Khan. Ustad Kale Khan was also a renowned singer and composer. Khan Saheb also took training in music from Ustad Akhtar Hussain Khan and Ustad Ashiq Ali Khan of the Patiala Gharana. At the age of 21, Bade Ghulam Ali Khan came to Banaras where he started singing in some small concerts along with playing Sarangi in others. It is said that he sang in a big concert in Kolkata, after which he developed an identity in the world of music.

When partition took place in 1947, Kasur became a part of Pakistan and Khan Saheb went to Pakistan. But after a few years, he returned to India and then remained here only. Bade Ghulam Ali Khan Saheb used to say, “If one child in every house was taught the Indian classical music, the country would have never faced partition.”

In 1957, he got the citizenship of India with the help of Morarji Desai. He was also given a bungalow in the Malabar hills of Mumbai by the Indian government. Though most of his time was spent in Lahore, Kolkata and Hyderabad along with Bombay.

Seeing his talent and popularity, many filmmakers wanted him to sing in their films, but Khan Saheb kept refusing. It was only producer K. Asif who could convince him to sing two raag based songs in his film Mughal-e-Azam. Some say that with the intention to turn down the offer, Bade Ghulam Ali Khan had asked K. Asif for a sum of rupees twenty five thousand. It was a time when popular singers like Lata Mangeshkar and Mohd. Rafi used to get less than five hundred rupees for one song. But K. Asif was adamant. He paid Bade Ghulam Ali Khan rupees twenty five thousand and had him sing for his film. The two songs, which had Naushad’s music and were composed in raag Sohni and raageshwari, made him even more popular.

There was a hint of Jaipur and Gwalior Gharana’s singing also along with Patiala Gharana in Khan Saheb’s singing. He would sing every style like Thumri and Dhrupad with a lot of ease and melody. His study and preparation for a raag was such that he could sing one raag for hours. Though he always kept his performances short and interesting. He always sang keeping in mind his audience, and this is precisely why his fans are spread not only in India and Pakistan but all over the world.

Khan Saheb was a school of learning in himself. He had also composed innumerable compositions by the name of ‘Sabrang’. Khan Saheb had deeply studied how classical raags were composed out of folk music sung in different provinces.

While telling about the relationship between folk music and classical music, he would sing a composition composed in raag Pahadi- Hari Om tatsat…

This is the immortal composition by Bade Ghulam Ali Khan Saheb, which tells us that music is above all religions. In fact music itself is a religion that binds us all.

In 1962, Khan Saheb was awarded Padma Bhushan by the Indian government. He was also honored with the Sangeet Natak Academy award. A prolonged illness left him paralyzed in his last years. He died in Bashirgarh Palace, Hyderabad in 1968. The prime lane in Bashirgarh has been named after him in his honor. It is called ‘Bade Ghulam Ali Khan Marg’. Khan Saheb’s son, Munawar Ali Khan, also became a renowned singer. Singers like Pandit Ajay Chakraborty have kept his style of singing alive even today.