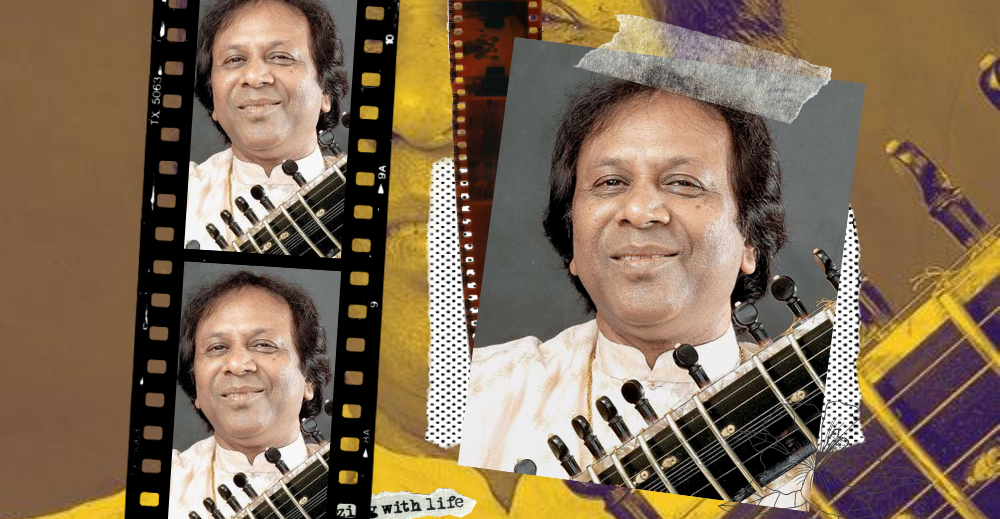 Ustad Shahid Parvez :Raag Is Not Important, Raag Is Only The Entry Point

There was once a great Sitar player. But he played for films instead of classical music. His father was angry with him because of this. He was disappointed that his son left the classical heritage of the family and chose to be part of films. This son had a son. When the son’s son became three years old, the grandfather started training him in classical music. He threatened his son that if he did not give this boy training in classical music, he will never forgive him. Fearing this, his son left the film industry and dedicated the rest of his life in training his son in sitar. He even left Mumbai for this and returned to his village with his son. This grandfather was famous Surbahar player, Ustad Waheed Khan and his grandson is Ustad Shahid Parvez, whose talent is well known for the world today.

Ustad Shahid Parvez says,”Raag is not important. Raag is only the entry point. Where you want to reach through the raag is what is important.” Shahid Parvez’s music really takes you to another world every time you hear him. Just like sugar dissolves in a second, his music dissolves in the mind in a moment. The moment he touches strings of sitar, the whole atmosphere becomes musical. Whether it is raag Bageshri, Jhinjhoti, Charukeshi or Yaman, people who recognize raags are mesmerized at his first stroke of the string.

Shahid Parvez represents the seventh generation in the family of Sitar players. He is the most popular star of the Itawa gharana. Itawa gharana has always been known for Sitar and Surbahar. There have been many maestros from Shahid’s family- Imdad Khan, Inayat Khan, Wahid Khan and Vilayat Khan. The people of this gharana have not held any other instrument in the last seven generations.

Flute, Violin, Sitar or Sarod, there is a different style of playing music on every instrument; a different pattern and a different method. But every instrument tries to come close to singing, because nothing else has the same capability of expressing a melody that voice has! This effort can be seen at the Itawa gharana. Strings play notes and create music but Shahid Parvez’s Sitar sings! Singing is Shahid’s gharana’s speciality, where melodies as sweet as the voice are created through Sitar. Listening to Shahid Parvez gives the pleasure of listening to songs. After playing music on the strings, he does meend, murkiyan and gamak creating magic. He has mastery over both singing and the Sitar.

After threat from the grandfather, the father started training Shahid in classical music from the age of three. The tradition in the family was that first of all, singing was taught. Hence, he was given training in classical singing for the first one year, so that he could transfer the same melody in his playing. Shahid Parvez’s grandfather was his first vocal trainer. Later, he worked with his uncle, Bollywood’s composer, Ustad Hafiz Khan, better known as Khan Mastana. Shahid Parvez learnt Tabla from Ustad Munne Khan. Although once he started playing Sitar properly, he only learnt from his father.

Shahid Parvez had started giving stage performances from the age of eight. Even at this age, he could create such magic with his playing that he began to be known as child prodigy. The impact of the childhood training echoes in his Sitar. Going from medium to high notes, creating a difficult compositions, when he would end, spellbound listeners would applaud at his magical performance.

Shahid Parvez travels the world today, and in every concert he leaves his audience spellbound. He has performed at the biggest musical events of the country and around the world. He has earned enormous fame in countries like America, Europe, Canada, Middle East and Australia. With innumerable music CDs, DVDs and beautiful performances, Shahid Parvez also has honors like the Padma Shri, Sangeet Natak Academy award and Sur Shringar award to his credit. Dozens of students are taking training from him all over the world. Among his contemporaries, Shahid Parvez is considered to be the best Sitar player.

This observation is critical. Well wishers of classical music will have to pay attention to this aspect.