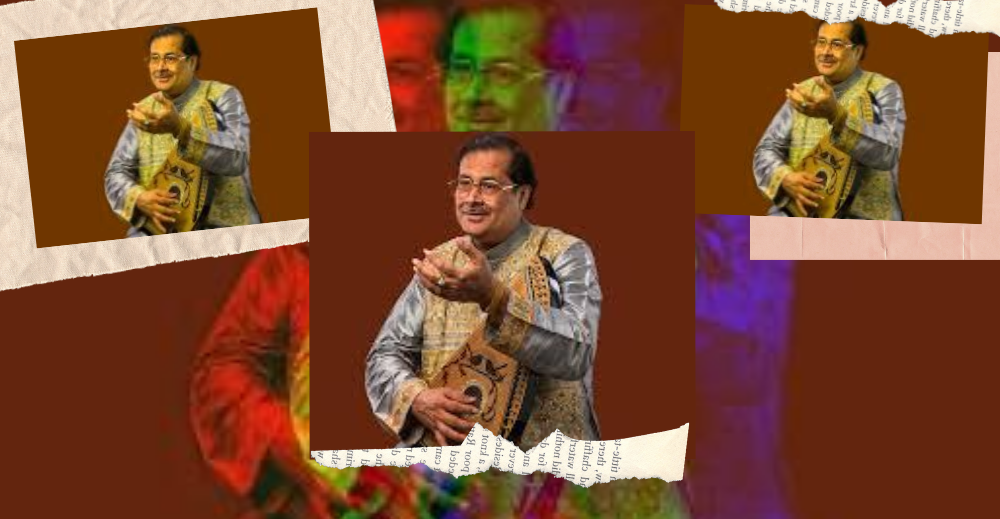 Ajoy Chakrabarty says “I am not worthy of singing in front of you. But I am trying”

Listen to the singing of these little ones.. So sweet, enchanting, melodious and filled with such simplicity!

These children probably don’t even realize how melodious their singing is. Without having distorted expressions they are performing such trivial compositions, delivering which will be a task even for a seasoned musician! Who is responsible for these wonderful voices? Who is nurturing them, nourishing their minds with notes of music? The answer is Pandit Ajoy Chakrabarty.

He belonged to the Patiala gharana; he sings in the style of Bade Ghulam Ali Khan sahab; a renowned name; keeps touring around the world as. But Ajoy Chakrabarty’s introduction is not that simple. The musician inside him is much bigger than any of his contemporaries. As a student, master and promoter of music, his aura is tremendous. His achievements are such that it is difficult to

Now look at the level of Ajoy Chakrabarty as a guru. He was the first scholar from the ITC Sangeet Research Academy, an academy that has given us great singers like Rashid Khan. This was in 1977-78. There, after proving his skills, he gradually rose from a student to the position of a teacher and started teaching music in Sangeet Research Academy only. ITC Sangeet Research Academy (http://www.itcsra.com/) is ranked among the top institutions not just in India but all over the world. There, following the guru shishya or the teacher-student tradition, music is taught maintaining high discipline. Students are scrutinized and selected only after they have cleared difficult tests. It is said that in classical music artists don’t come from institutions; artists come either from gharanas or from families of musicians. But the Sangeet Research Academy is an exception in this context. This academy has given many great scholars, one better than the other, who are doing well and performing all over the world. Ajoy Chakrabarty can also be counted among them. Ajoy Chakrabarty was one of the senior professors at the Sangeet Research Academy. But his guru Jnan Prakash Ghosh inspired him to start his own music school. This is how Shrutinandan (http://www.shrutinandan.org/) was established.

Shrutinandan is a music school, one of its own kind, where new talent is nurtured. Ajoy Chakrabarty had started it towards the end of the decade of 90s and today, thousands of students are echoing Ajay Chakrabarty’s style of singing. Ajay Chakrabarty himself says- How long can a diya (candle) survive.. With it will finish its light, but if hundreds and thousands of diyas (candles) are lit with it, which in turn light further more, imagine how much brightness there will be!

The good thing is that Ajoy Chakrabarty prepares his students with the same dedication and openness as he had for Kaushiki. Ajoy Chakrabarty must be praised for promoting such pure raga based music. As a guru Pandit Ajoy Chakrabarty hasn’t stopped here. In this era of digitalization, he is also giving thousands of students online classes in India and abroad.

Explaining the basic concept of music or melodious sounds Pandit Ajoy Chakrabarty says- Time is invisible and speedy. When we fill sound in it, we begin to see it passing by. This is somewhat like blowing colours in the air. In these colours one can then see the direction of the air.

As a singer Ajoy Chakrabarty has achieved a very high level. Along with singing Khayal and Dhrupads, he is also known for singing Thumri, Dadra, Tappa, Geet, Bhajan, Kirtan, folk music and film songs. From classical to light music, no side appears weak. Expressions according to the text of the music is his speciality. Devotional and love based subjects are natural to his voice. He has recorded numerous cassettes and CDs of Ravindra Sangeet, Nazrul Geeti, Shyama Sangeet and modern songs. His album with HMV on ‘raga based’ songs has every single song, a lesson for the music students. Musician Uttam Singh had him sing a piece of raga Khamaj in the movie Gadar. He was accompanied by Begum Parveen Sultana of Patiyala school of Indian classical music.

More than 100 of his music albums have been released in India, America, Canada, Britain and Germany. Huge crowds collect to listen to Ajoy Chakrabarty in music concerts held in India and around the world. He’s constantly travelling to almost every big country in the world for his performances. Ajoy Chakrabarty is the first Indian musician who has had the honour of being invited to perform in Pakistan and China by their governments.

Honoured with the Padma Shri, he has won many accolades such as the Sangeet Natak Academy Award and Kumar Gandharva Award. But nobody can be as humble as him. He is about 62 years old now with innumerable achievements to his name, but even today the pride of being a master is no where to be seen in his body language. Before beginning with his performance, what he communicates to his listeners is more like an appeal. “I am not worthy of singing in front of you. But I am trying.” Such lines by a great artist like him only show his modesty and humble attitude. It is rare to see such modesty in today’s classical musicians. And then the depth of alaap in his singing, his ability to effortlessly sing the most trivial notes, ability to perform laykari, and to retain melody and ease in the fast paced notes delights listeners.