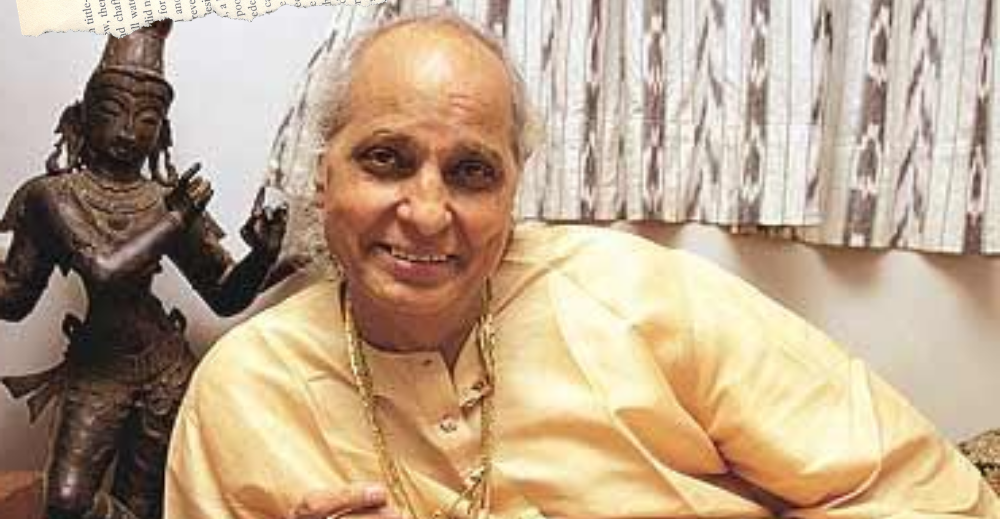 Like the roar of of a lion, his voice ran fast in the seven and a half saptaks. Taans like murkiyan, gamak, meend and chhoot are the speciality of his singing. The magic of his singing was like the magic of Krishna’s murli or flute, leaving the listener spellbound. People called him Sartaj or the King. In our times there are very few musicians who can connect you to spirituality, take you to the heavenly world. Sangeet Martand Pandit Jasraj is one such singer. Pandit Jasraj himself says that music is a medium of connecting with God.

With this very shlok Pandit Jasraj starts singing any raga. First remembering God and then taking on an endless journey of music. While listening to Pandit Jasraj’s  ‘Mero Allah meharbaan‘ in raga Bhairav, one feels that people fighting over religion are so ignorant. (Or Hari Om tatsav by Ustad Bade Ghulam Ali. Music is actually filled with such examples.)

Jasraj was born on 28 January 1930 in Hisar, Haryana; a place that falls in the Mewat region. That is why his gharana is called Mewat gharana or the Mewati gharana. Even though he spent his childhood in Hyderabad. His father, Pandit Motiram, was a classical singer. Jasraj’s father had started his musical training when he was merely three years old. This was in about 1934. Jasraj had turned four years old by then. A concert of his father, Pandit Motiram, was to happen in Hyderabad and in this very concert he was to be announced the court singer of the then Hyderabad’s nizam, Nawab Usman Ali Khan. But unfortunately he died about five hours before the concert. After his father’s death his elder brother, Pandit Maniram, took over the responsibility of training Jasraj.

Jasraj was taught how to play tabla in his childhood. The second eldest brother, Pandit Pratap Narayan, was also a classical singer. He taught tabla to Jasraj and also started took him along as accompanist. (Music composers Jatin-Lalit, singer-actor Sulakshna Pandit and Vijeta Pandit Pratap are children of Pandit Pratap Narayan which also means that they are the nephew and niece of Pandit Jasraj.) At the age of seven, Jasraj was already on the stage with the tabla. Gradually his became more and more proficient in it. Jasraj recalls in one of his interviews that once famous singer Kumar Gandharva had a recording at the Lahore radio station. Jasraj was also in Lahore at that time with his elder brother regarding some programme. Pandit Kumar Gandharva took Jasraj with him as accompanist. Kumar ji sang raga Bheempalasi in this recording. The next day Pandit Amarnath and Jasraj’s elder brother were discussing something about Kumar ji’s singing. Jasraj started giving his opinion on this. He got snubbed by his elder brother, “Jasraj, you play an instrument made of dead skin, what do you know of the ragas?” Jasraj was taken aback by this reaction of his brother. But he says that the very next day his elder brother started his vocal training. This was the day of the Nand festival. Jasraj vowed not to get a hair-cut till he had learnt singing and he did not get a hair-cut for seven years. He got his hair cut only after his first recording at the All India Radio. He had sung raga Kaunsi Kanhada in this programme.

As a child Jasraj was a big admirer of Ghazal singer Begum Akhtar. He recalls that there was a restaurant on the way to his school. There, one of her Ghazals was always playing- Deewana banana hai to deewana bana de, varna kahin taqdeer tamasha na bana de.. After hearing this Ghazal, Jasraj went crazy and decided that he would only sing. He kept his vocal training on from his elder brothers, especially from Pandit Maniram. In 1960, Ustad Bade Ghulam Ali Khan, the singer of the Patiala gharana, fell ill. When Jasraj went to meet him in the hospital, he asked Jasraj to become his disciple. This offer from such a great guru both surprised and made him happy, but he very modestly turned down the offer. He said, “Uncle, I can’t become your student. Learning from you is not in my destiny. I want to revive my father’s style of singing.” Jasraj says that after hearing this Bade Ghulam Ali Khan Sahab had tears in his eyes. He said, “Listen son, it was your father who got me into singing. I was a wrestler otherwise!” Khan sahab did belong to a family of legendary singers, but initially he was a wrestler.

Jasraj ji has done a lot of work on the Haveli music and created many Bandish or musical compositions, one better than the other. Pandit Jasraj sang some very rare ragas like Charaj ki Malhar, Abiri Todi, Bhavsaakh, Devsaakh, Gunji Kanhada etc. Pandit ji has many talented students who are now taking his style forward. Sanjeev Abhyankar, Kala Ramnat, Sadhna Sargam, Ratan Mohan Sharma, Ramesh Narayan, Suman Ghosh and Tripti Mukherjee are amongst them. Jasraj ji has developed a special technique of duet singing which is given the name Jasrangi. In this technique, both male and female singers together sing two ragas. This technique is based on the principle of moorchhna, in which both singers are actually singing the same notes but the Adhar note or Sa is present at different points, thus changing the ragas for both.

In 1962, Jasraj ji got married to famous film director V Shantaram’s daughter Madhura. He had met Madhura in 1955 when V Shantaram was shooting Jhanak-Jhanak Payal Baje. After marriage Pandit Jasraj started living in Kolkata with his wife. Here his son Sharang Dev and daughter Durga Jasraj were born. Sharamg Dev is a music composer and Durga Jasraj is a television anchor. His wife Madhura herself is also very talented. She has directed many documentaries and children plays. Madhura has directed highly acclaimed plays like Geet Govind, Kaan Kahani and Surdas. For television, she had produced a series called Faster Phone. Madhura made a film on the musical journey of her husband in 2009- Sangeet Martand Pandit Jasraj. She also directed a Marathi film called Ayi Tujha Aashirwaad in which Pandit Jasraj and Lata Mangeshkar have also sung.

Pandit Jasraj was honoured with Padma Vibhushan in the year 2000. Besides this, he has also received the Sangeet Natak Academy award, Sangeet Kala Ratna award, Master Deenanath Mangeshkar award and the Lata Mangeshkar award. In Hyderabad every year, Pandit ji organises a musical concert in the memory of his father Pandit Motiram and elder brother Pandit Maniram. Many famous musicians take part in it.

Pandit Jasraj is not averse to the idea of filmi music also. In 1966 a film had come- Ladki Sahyadri Ki. The music in the film was given by Vasant Desai. Pandit Jasraj had sung a song for the film- Vandana Karo… By this song, you will have an idea of Pandit Jasraj’s class.

Listen to another interesting song. In 1973, a film called Birbal My Brother had been released. The music in this film was given by Shyam Prabhakar and he had got the songs of the film sung by the greatest singers of that time. There was a duet by Pandit Jasraj and Pandit Bhimsen Joshi in the film. This song, Ranraliyan karat pritam ke sang, was sung in raga Malkauns. Listen it-

Vikram Bhatt had made a horror film in 2008- 1920. Music in the film was given by Pakistani singer and music composer Adnan Sami. Adnan had got Pandit Jasraj to sing one romantic song in the film- Wada, tumse hai wada.

We also heard the voice of Pandit Jasraj in the background music in Ang Lee’s popular film, Life of Pi, released in 2012. May Pandit ji continue singing like this and keep adding the flavour of music to people’s lives. This is our only prayer!