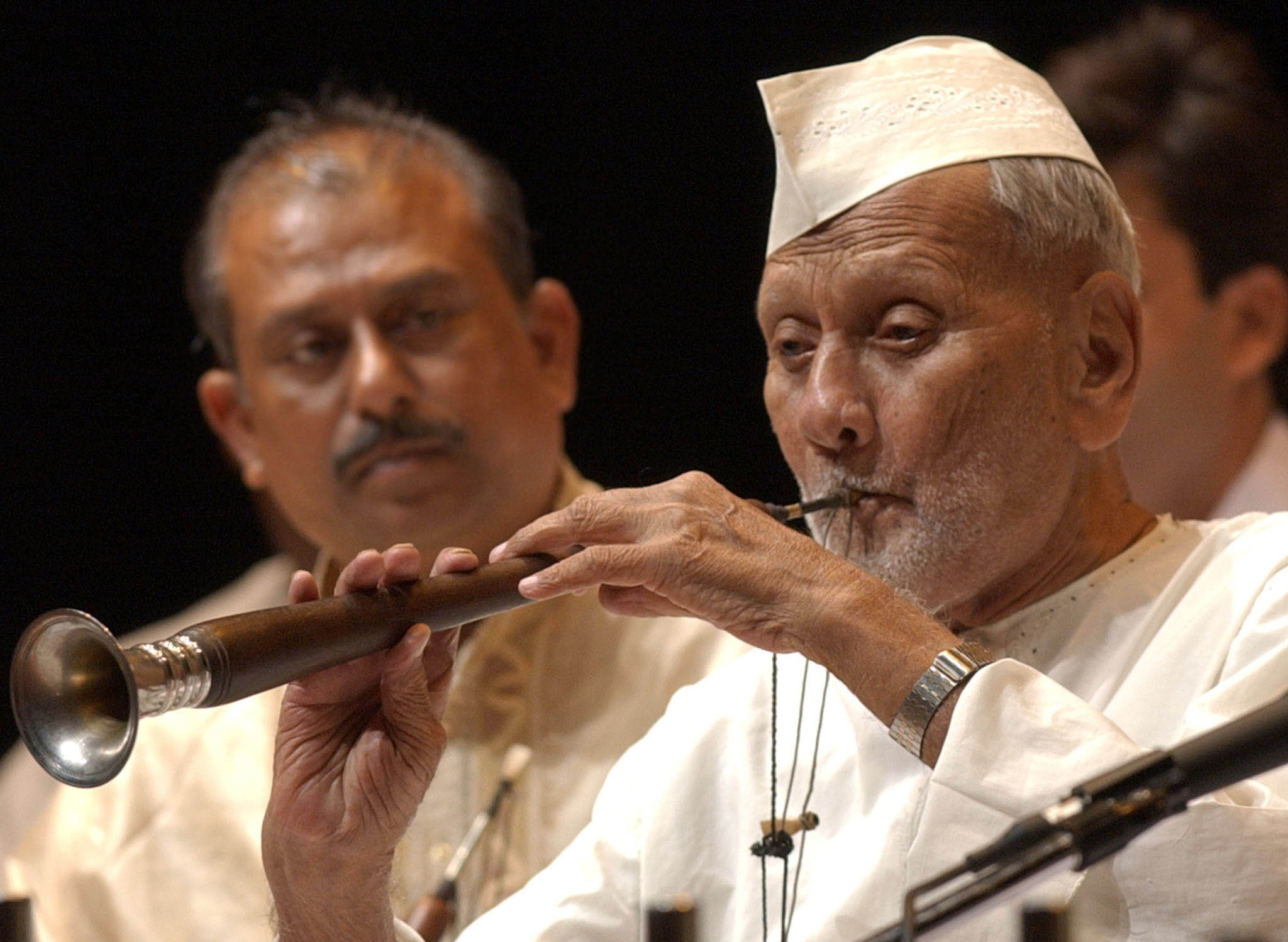 ‘Melody is the king’

‘God is one and so is music’

‘Melody is not anybody’s inheritence, you will get it when you make an effort’

‘If you spend money, it will finish. Try spending the melody my friend.. It will never finish.’

‘I don’t know about this and that, I only talk about music and melody.’

Really, he only talked about melody. You may start the conversation with anything ranging from religion, politics to the country’s state of affairs, but he would ultimately bring it to music. And then with glittering eyes, he would start humming something; something like a sweet Banarasi tune. At that time it felt as if Shehnai is playing from his throat. The answer to every question was pure melody. The explanation to every query, just pure raags. Once a scholar tried to make him understand that music is considered a crime in Islam. He sang ‘Allah hi Allah, Jilleshan Allah’ in Raag Bhairav and asked if singing it was a crime! The scholar became quiet. Such was the great Shehnai maestro Ustad Bismillah Khan.

The musicians playing Shehnai on a tiny stage set up at some hidden corner of the house of marriage, didn’t have more relevance for people than the tent people, decorators and caterers. They also played pure raags like Maalkauns and Maaru Bihag. But in the times of kings and queens, it is said that these musicians were given the third floor to sit. But Bismillah Khan’s Shehnai created such an aura that its importance reached a different level. The Shehnai that was played as background music on happy occasions, now became part of big concerts where it was applauded and appreciated. That is why Shehnai and Bimillah Khan became a synonym for each other, forever.

Bismillah Khan was born on 21st March 1916 in Dumrav, Bihar. His parents had named him Kamruddin. But it is said that when his grandfather saw him for the first time, the first word he said out of joy was Bismillah. And thus he was named Bismillah. It was a family of musicians. His ancestors included singers as well as Shehnai players. His father, Paigambar Baksh, was employed at the king’s court in Dumrav. The sound of Shehnai thrilled Bismillah since childhood. When he turned six, his uncle Ali Baksh brought him to Banaras with him. His uncle himself played the Shehnai. His Shehnai was often heard in the Balaji and Bangla Gauri temples of Banaras. Bismillah was sent to school for studies. But it did not interest him. His heart was where there was music. Listening to his uncle’s Shehnai, Bismillah had become crazy for it. Seeing his interest, his uncle got him a six inch long Shehnai which is called Nafeeri. Bismillah tried to play it and thought it will only give melodious music, but it did not happen so. In fact people laughed at the sound first produced. Bismillah became sad. Then uncle Ali Baksh put him on his lap lovingly, and taught him how Shehnai is held and played. This is when Bismillah’s formal training started in the guidance of his uncle, Ali Baksh.

He got a chance to perform in Allahbad in 1930. After this, fragrance of his Shehnai started spreading all over. In 1937, at the age of about 20, he became part of Kolkata’s All India Music Conference. He was praised so much that he didn’t ever look back. Gradually Bismillah Khan started being called Ustad or the master. The master of raags as well as Banaras’s Kajri, Chaiti, Sawni, Holi and Thumri. Khan Saheb was known for his jolly nature. The sweetness in his heart reached people through his melodious music and it showed its impact instantly. When Akashwani used to be the only source of entertainment in India, in innumerable households the day began with the melody of Khan Saheb’s Shehnai.

Khan Saheb also became associated with some films. His music became part of films like ‘Goonj Uthi Shehnai’ and Satyajeet Ray’s ‘Jalsaghar’. He played Shehnai for many more films, but they say that he did not like the editing done in music to suit the requirement of the film. That is why he disassociated himself from films.

In 1947, one day before independence, when the Indian flag was waving at the Red Fort, Bismillah Khan’s Shehnai was giving the message of freedom. Bismillah Khan was beyond the boundaries of religion. He played Shehnai at temples and also on occasions like Moharram. Shehnai was a way of connecting with God for him. He gave everyone the message of love and peace through his music.

Bismillah Khan loved his country. Banaras, especially, was very dear to him. He could not imagine a life without Banaras. Once a very rich person gave him the offer of living in America. Khan Saheb asked him, “Can you take mother Ganges there? Take Ganga there and I will come along.”

Seeing his great contribution to music, the government of india honored him one after the other with Padma Shri, Padma Bhushan, Padma Vibhushan and then Bharat Ratna.

Khan Saheb was always known for his simple and saintly style of living. Though the needs of family also made this saint realize materialistic values again and again. Many times he very openly said that award is not enough to feed hunger. Just ten rupees may be, but the government must give some help. But this did not happen. Poverty stricken Ustad died on 21st August 2006. But the melody of his Shehnai echoes not only in India, but all corners of the world.