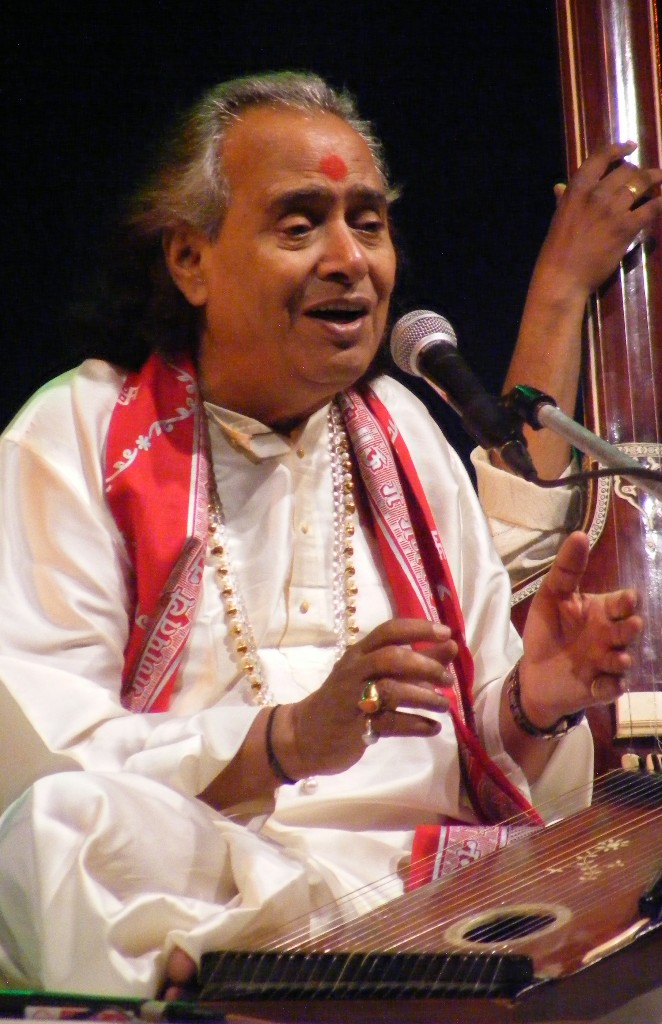 Pandit Chhannulal Mishra Says ‘if the listener cannot understand the song, it is useless to sing’

It must be the year 1995-96. There was a function of classical singing going on at the Allahabad Prayag Sangeet Samiti. It was winters. At about 10 pm a well known musician, Rajeev Dave, sitting in the front row got up to leave. The singer on stage said- Dave ji, allow me to say a  few lines for you-

Which means that my heart sinks as you stand up to leave..

Dave ji got embarrassed and sat down again, and got up only once the entire programme was over.

The singer on stage was the beloved of all, classical singer Pandit Chhannulal Mishra. Chhannulal Mishra was of such character. He sings with utter joy and when he sings, he does not look at the time. Whoever listens to his singing once, never forgets him because his style is most unique. A constant dialogue with listeners, telling them the different forms and styles of singing, the meaning and the real sense of the song is his speciality. You can hardly tell when he starts talking while singing and when he will pick up words from his own conversation to start singing. This is precisely why listeners are constantly engaged in his magical singing.

Pandit Chhannulal Mishra says- ‘if the listener cannot understand the song, it is useless to sing.’ That is why he sings, explaining all along all aspects of the song. If he is singing Thumri, he will explain what khatka and murki are, what is gidkiri and pukar. What is the nature of Thumri in Punjab, how is it sung in Gaya and how are the lyrics different when sung in Banaras.

Music, literature and communication are Chhannulal Mishra’s biggest strengths. Chhannulal ji feels that music is incomplete without literature. He underlines the meaning of the song in his performances. He sings explaining the meaning of every word and the reason behind its usage all along. When he sings ‘Khelein masaane mein hori digambar’ and draws a picture of Lord Shiva and his gan or fellows celebrating Holi, listeners are taken to a different world with his magical spell.

When he sings Radhika’s Holi, a spell binding style of Shringar ras captures all.

Chhannulal Mishra is a complete musician. Khayal, Dhrupad, Dhamaar, Tarana, Thumri, Bhajan, Hori, Chaiti, Kajri, Sohar, Jhula– you name it and the great Pandit will prove to be a master at all. In his colloquial Banarasi accent Chhannulal ji says- ‘a singer should be like a super store. You should get whatever you want. Not that if you sing classical, you sing only that. He must be able to deliver all.’

Chhannulal Mishra is a master at singing different styles and forms but literature is never ignored. He says, ‘music is a form of God, and therefore enjoying it is essential. One must sing ragas only till the time he is enjoying it. When one stops enjoying ragas, he must stop at once. There are many others to sing still- Kajri, Chaiti, Hori, Sohar..‘

Chhannulal Mishra was born on 3rd August 1936 in Hariharpur located in the district of Azamgadh. His grandfather, Pandit Saamta Prasad, was a well known Tabla player and was known as Gudai Maharaj. Chhannulal Mishra’s father, Pandit Badri Prasad Mishra, initiated his music training. His father would wake him up early morning for riaz or practice from the age of five. After this he took Chhannulal to Muzzaffarpur in Bihar and placed him under the guidance of Abdul Gani Khan of the Kirana Gharana. Chhannulal ji took training in classical music from him for nine continuous years. Besides him, he also got training from Padma Bhushan Thakur Jaydev Singh.

Channulal Mishra tells that the king of Panchanagar, Kumar Shyamanand, had offered his father that he will make Chhannulal a court singer and thus asked his father to leave him there, but his father replied that he will not be able to live away from his son. After that, at the age of about forty, Chhannulal came to Banaras and then stayed there only. He himself says- My birth place is Hariharpur but the work place is Banaras. Technically, Chhannulal Mishra belongs to the Kirana Gharana but today he has become another name for purab ang gayaki.

Chhannulal Mishra’s personality is also influenced greatly by Banaras. He has been a scholar of Hindu religious scriptures. The Sanskrit phrases, Manas ke dohe and chaupaaiyan are a compulsory part of his performances. He has tried to take the messages in the religious scriptures to the masses through his music. He has composed even Sundarkand in ragas and recorded it. For example this Vibheeshan Geeta- in which Sri Ram is preaching Vibheeshan.

Or the description of Lord Shiva’s marriage.

Pandit Chhannulal Mishra has an expertise over folk and traditional music also along with classical music. His music is a melodious blend of Punjab, East and Gaya’s music. He has received honours like the Padma Shri and the Sangeet Natak Academy award. Though he is still known for his modesty and simple living.

Prakash Jha had got Chhannulal ji to sing a song in his film Arakshan- Saans Albeli. With him was Shreya Ghoshal. Listen it.