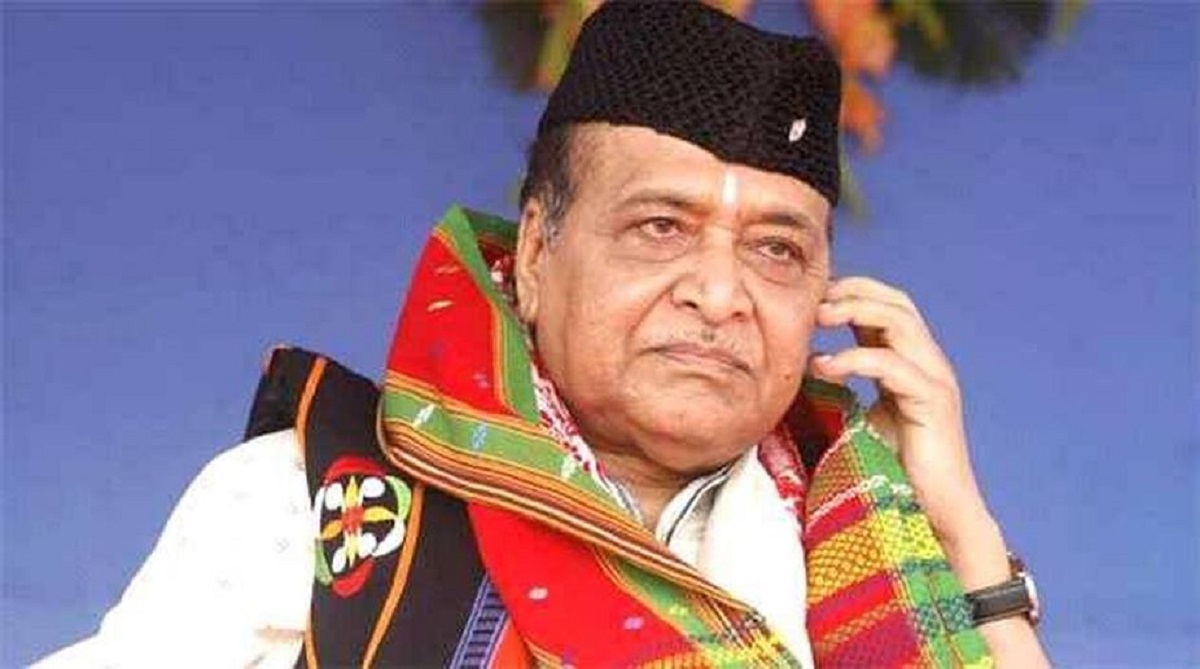 Bhupen Hazarika Would Not Divide Good Music Into New And Old

I am a traveller

Bhupen Hazarika, I was introduced to this name about 22 years back. It was one of the  evenings of 1992. I was looking for classical and semi classical music at my favourite store, Inspect, at Civil Lines in Allahabad. I saw an HMV cassette- Mai Aur Mera Saya. A picture of a middle aged gentleman with a round winter cap on a brown cover was printed. The name was Bhupen Hazarika. Gulzar’s name was printed for translation and commentary. I bought that cassette. That voice had such deep impact on me that I still listen to that voice, the voice of Bhupen Hazarika.

In the beginning of the album, ‘Mai Aur Mera Saya’, Gulzar sahab says, ‘Introducing Bhupen Da is a tough task..’ What he said is hundred percent true. Bhupen Hazarika’s personality has many different aspects and to find all of these in one person alone is a miracle in itself. Its incredible how one person can play so many roles. Lyricist, music composer, singer, poet, journalist, actor, film director, script writer, artist, the oldest and probably the only artist who gave Assam’s music culture and films recognition throughout the world; and if we go into the details of these adjectives and his achievements, there is so much to say that one can go on talking about it. Born in the soil of Assam, the stature of Bhupen Hazarika was so huge that even the queen of voice, Lata Mangeshkar says, ‘I know Assam by the name of Bhupen Hazarika.‘

Bhupen Hazarika was born in 1926 in a small town in Assam called Sadia. He passed class XII in 1942 from Guwahati and went to the Banaras Hindu University for pursuing Bachelors in Arts. He completed BA in 1944 and MA in political science in 1946. After this he went to New York, stayed there for five years and  did PhD from Colombia University. It was there that Bhupen met Paul Robson. Paul Robson was a folk singer who was fighting against racism in America, at a time when not even a case was filed at the murder of a black or an Indian. Robson left an impression on Bhupen in many ways. The first impression was on his voice.

Bhupen Hazarika’s voice is most different. From the depths of Kharaj rises Artnaad. A voice that remains in the listener’s mind, in which there is melancholy, utter grief, discontentment, revolt, pain of the deprived and destitutes; and questions that will leave you speechless.

Where is the source of this voice?

This song was sung at areas by the Mississippi river in South America. Paul Robson used to sing this song. In areas surrounding Mississippi, slavery existed for a very long time. Addressing the Mississippi river, Paul Robson pointed out to the social disparities through the song. Bhupen was so influenced by this song that he composed an Assamese version of the same song ‘Bisteerno Parore’. In Bhupen’s version there was Brahmaputra in place of Mississippi, which is called Lohit in Assamese. Later this song was also sung in Bangla and Hindi which is addressing Ganga.

Paul Robson’s second influence was on Bhupen’s thoughts. Robson taught him that music can be made more relevant by connecting it with social upliftment. From here Bhupen Da’s thoughts got a direction. The beginning of his socially relevant music was probably from here only. In Kalpana Lazmi’s film, ‘Darmiyan’, he is heard singing for the transgenders-

In ‘Mai Aur Mera Saya’ he sings for the water bearers-

Sometimes the story of the women working in the tea gardens.

Sometimes the tale of the drowned boatman Ramayya-

In Kalpana Lazmi’s ‘Rudali’, the song ‘Dil hoom hoom kare..’ has been sung by Lata Mangeshkar also but listening to Bhupen Da’s version one feels that the song is meant for his voice only.

This music composer is among the topmost film producers as well. For about 40 years, with the help of outstanding cinema, he continuously worked for the northeast, especially the tribal culture. When Bhupen Da got noticed for the first time in the world of music and art, he was less than ten years old. At this age he had started writing and singing songs. In 1939, he was seen as child artist in ‘Indramaalti’, the second coloured film in the history of  Assamese films. Once it got going, he never stopped. He was associated as director, music director or singer with popular Assamese films like Era Baataar Sur (1956), Shakuntala (1960), Pratidhwani (1964), Lotighoti (1967), Chikmik Bijuli (1971), Mone Prajapati (1978), Sweekarokti (1986), Siraj (1988), Mahut Bandhure (1958).  Bhupen Da was also the producer, director and music director for Arunachal Pradesh’s first coloured Hindi feature film, ‘Mera Dharam Meri Maa’. In 1998 he gave music in ‘Gajgamini’, a film written and directed by famous painter MF Hussain. He won a national award for Assamese film, ‘Chameli Memsahab’.

Bhupen would not divide good music into new and old. In an interview while giving an opinion on new composers, he said- ‘Today we have AR Rehman. He knows the taste of the new generation. Like Salil Chaudhry, he has great understanding of Indian and western music. He even includes the regional music of north India in his tunes. He only has to remember that he does not become a consumer product under the pressure of the market.’ Bhupen da appreciated Hariharan. He was fond of Ilayaraja and missed the melody of Hemant Kumar.

Hemant Kumar played an important role in Bhupen Hazarika’s life. After his return from America, when he reached Bombay to work with Salil Chaudhary, Balraj Sahni and other leftist intellectuals at EPTA, he met Hemant Kumar there.

Hemant Kumar introduced him to all known music directors and singers. It was Hemant Kumar only who took Bhupen to Lata Mangeshkar’s house for the first time. In the first meeting Lata said-  ‘You are young for your fame, I will call you dada (elder brother).’ As director, Bhupen Hazarika wanted Lata to sing his first film’s song. Lata sang it. This song, ‘Jonakar rati..’  was released by HMV and became a huge hit. Hemant Kumar got Bhupen to sing a song in Uttam Kumar’s film ‘Jeebone Trishna’. This song was ‘Shagor shongame’ which became a big hit. For ‘Mai Aur Mera Saya’ Gulzar had translated this very song-

Bhupen Da really saw many oceans and many rivers. For attending events related to cinema, poetry, music and journalism, he travelled from Mississippi to Danube, Europe to America and from Asia to Australia. Probably that is why he writes- ‘Ami ek jajabor’ meaning ‘I am a traveller’. Gulzar has given a Hindi version to this song-

His reclusiveness shows in his personal life as well. Transformation of Bhupen’s relation from professional to personal with film director Kalpana Lazmi, is a unique story. He gave music in Kalpana Lazmi’s film ‘Ek Pal’ in 1986. Studded with actors like Shabana Azmi, Nasiruddin Shah and Farooq Shekh, this movie received many awards world over. The TV serial, ‘Lohit Kinare’ that gave Kalpana her identity, had Bhupen’s music. After this Bhupen became an integral part of Kalpana’s many acclaimed films like; Rudali, Darmiyan, Daman, Chingari and Kyun. All this while Kalpna Lazmi became more and more close to Bhupen. At the time Bhupen and Kalpana came close to each other, Kalpana was only 17 and Bhupen was 45 years old. Bhupen had a son from his first wife Priyamwada, but this did not make any difference to Kalpana. She remained Bhupen Da’s partner for four decades. She also announced in front of the media that she is Bhupen Hazarika’s wife. In his will Bhupen Da left a big portion of his property to his partner, Kalpana.

Bhupen Hazarika used to sing in many languages but he wrote songs and poems on Assamese culture, river Brahmaputra, local traditions and contemporary problems only in his local language, Assamese. He has written over a thousand songs and poems. He has written fifteen big books in which there are short stories, essays, travelogues and poems for children. He was the editor for monthly magazines like Aamaar Pratinidhi and Pratidhwani. In 1977 he was honoured with Padma Shri. In 1993 he won the Dadasaheb Phalke award, an award that is known as the Oscars of Indian cinema, for his contribution in promoting the Indian cinema. In 1993 he also won the award for the best music composer at the Asia Pacific International Film Festival in Japan, for his music in the film ‘Rudali’. For his song, ‘Dil hoom hoom kare’ from the film ‘Rudali’, he was even praised by personalities like Michael Jackson and Madonna. In 2001, he was awarded with Padma Bhushan. Like I had said earlier- His list of work and achievements is so long that it is difficult to stop talking.n the early months of 2011 Bhupen Da had started keeping unwell. Jajabor’s steps were losing energy. On 5th November 2011, at the age of 85, this itinerant said goodbye to the world at Kokilaben hospital in Mumbai, and left for an endless journey in the infinite.