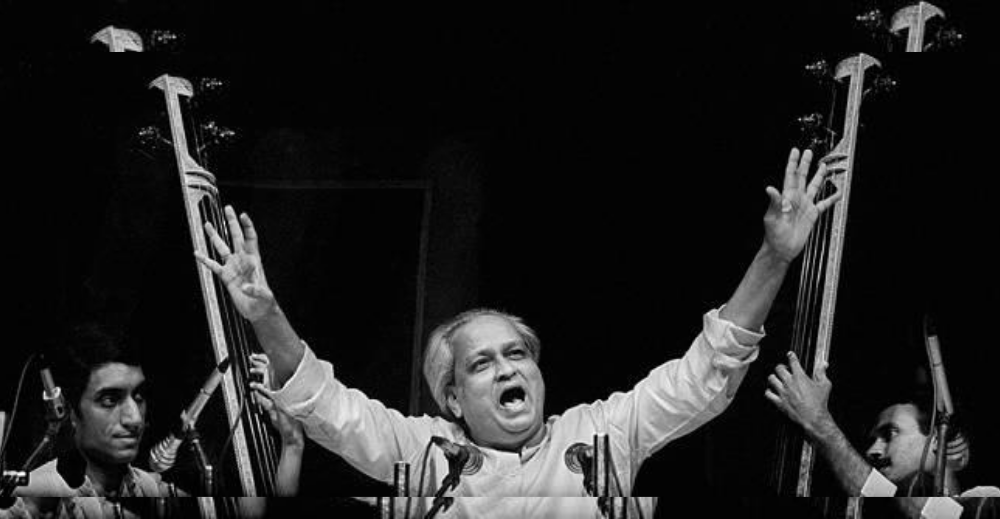 By Raaggiri April 7, 2021 Legends
No Comments

Kumar Gandharva’s talent apparent everywhere; if he was in an ocean he would be a hurricane

All of Malwa is a village with a platform in the middle. Made with stones from the blue hills of Vindhyachal, the platform stands tall. The mud platform is made with the rich soil of the land. It’s painted in yellow earthen paint by the women of the village. They sing while cover the platform with fresh layer of mud – ‘enhance the joy on this auspicious occasion, by bringing my sisters-in-law home.’ The young girls among them sing, ‘friend I am covering the porch floor with chandan’. Girls along with their friends sing that they are decorating the platform with pearls while they sing, ‘this day shines like gold’.

Bheru ji is sitting on the platform covered with pearls. Bheru ji is the name of village-deity, ‘Shiva’. This Bheru ji is no one else but Shiva‘s son, Sidharamayya Komalani or Kumar Gandharva. Kumar Gandharva; born in Sulebhavi village of Karnataka, Belgaon; the one who learned music in Bombay and Pune; the one who came over to Devas and the one who dug his ‘Chimta’ under the vast blue sky, just as like Kabir; our Bheru ji, is the one with red bindi. ‘Bheru ji, you have come to us as a child. You have long hair and your forehead dawns strings of mogra’.

O child-like Bheru ji today you have turned sixty, and the mogra in your long locks looks lovely. The rituals are delayed because I had to get kalash from the pot maker and frame from the woodcraftsman. BheruSSS jiSSS, BheruSSS jiSSS. You have cleansed our classical music with folk and transformed it into and eternal cosmic drumming. BheruSSS jiSSS BheruSSS jiSSS. The entire sky reverberates with the rhythm of our sages, who sing with their chimtas. Your presence has brought back thousands of year old music and life back in Malwa – Bheru jiSSS! With utter fearlessness and omnipresence we will sing your praises Bheru jiSSSSSSSS.

To an extent, Kumar Gandharva’s music and his contribution to classical-music can be understood, by reading Chetan Kernani, Deshpandey, Rahul Barpute and if you wish to impress, perhaps through a dozen articles by Ashok Vajpayee. But still there is scope of some parts that one will not be able to enjoy, and ask, what was being sung? When informed that Bhairvi was being sung… they will say, oh great, so it was Bhairvi.

But while listening to the music if you feel that it is time for sunrise and the temple bells are ringing, fragrance is in the air and mogra placed on the feet – then weather one knows or not, it is Bhairvi that is being sung.

To enjoy music one doesn’t need its theoretical or technical knowledge (Shastra). Even if Shastra is part of music, still it is beyond it –this is what Kumar Gandharva has been singing for the past 50 years. His biggest contribution is that he has turned the triviality of classical music into an art, but not because, tuberculosis took away the strength required for difficult taan and pancham sur for classical music from the year 1947 to 1952. Kumar ji developed TB right after his marriage. Once he said to his wife Bhanumati in a faint voice – ‘Bhanu, I will not die, till I sing’; Kumar Gandharva does not need to be a TB patient to salvage classical music. Is his greatness dependent on a disease? Music is inherent to him. Where ever Kumar ji had been, he would be a maestro, if he was in an ocean he would be a hurricane.

Rahul ji (Kumar ji’s fast friend, Rahul Barpule) has written that Kumar ji came to live in a small town on the 30th of January 1948. While people left small towns for Bombay to get cured of deadly TB, Kumar ji left Bombay and moved to the small town of Malwa. Rahul ji has mentioned of Kumar ji’s great ability of tackling difficulties with his will power; make decisions and implement them on his own. No doubt, he had this strength. Once at Mama (Krishnarao) Majumdar’s house in 1943, right after the song was over, Kumar ji felt that he had learned the art of singing.

So Devas was a place that brought sense of realization to Kumar ji. His coming over to Devas while struggling with TB, was his desire to find himself. More than the medicines available in Bombay, perhaps he wanted to win this battle with TB through his quest for ‘self’. But this was not just about winning a physical ailment with inner-strength. At Malwa, he also found his music. It’s as if his music found freedom from the ailing body of classical (Shastra) and became one with the soul of folk.

All are of the opinion that what Kumar ji sang after being cured in 1952, was never sung before by anyone else. With Kumar ji’s self-realization with Music at Devas, his music became what Ganga becomes at Kashi. Kashi is the biggest holy place for Ganga because it is here that Ganga turns its course from north to east. Kashi is point where Ganga looks back at its origin, Gangotri, just as Kumar ji’s music turns to the original tune of humanity. It’s the same primitive reverberating rhythm that takes us to the attainment of ‘nothingness’ while listening to Kabir, a place where the creation’s eternal rhythm plays. Kashi is same city that belongs to Kabir and also where Ganga turns to the North. In Devas, Shiva’s disciple, Kumar ji found freedom from TB, and also Kabir from Shiva’s city. Kumar ji’s music has a confluence of, Shiva, Ganga and Kabir’s philosophy.

It was not a coincidence that Kumar Gandharva’s came to Devas. Also, it is not a coincidence that for 5 years, Kumar Gandharva kept listening to Malwa’s endless folk music, while struggling with TB. No renascence happens without finding and attaching one’s self with the root. The renaissance in Europe happened through Greek and Latin roots and when people of great talent attached them with that root. That’s how western civilization rejuvenated itself and infused new life, which spread throughout the world. The truth about such renaissance or rebirth is that it is the umbilical cord. Even though it has to be severed at the time of the birth, there remains a primitive and endless desire to get connected with the same umbilical cord again. All that is creative is born from this desire to be attached with our roots. How is it possible that an artist with the creative caliber of Kumar Gandharva will not club music with the umbilical cord of folk music? He may not have had TB, it could have been some other disease. He may not have come to Devas, he could have been to some other place. He may have attached his music with Malwa’s roots but that of some other place, but he would not have created this music without marrying the classical music with the folk music. If not then perhaps he would not have created but just reproduced and served (Kuligiri) the old Classical music traditions.

This kuligiri (serving) is also Kumar ji’s word. While talking about the devotional music tradition of Kabir, Sur, Meera and Tulsi, he says that Sur, Meera and Tulsi are carriers of great Bhakti or devotional tradition. Their poetry is good, in fact excellent, but Kabir is different. He considers himself to be Ram’s Bahuriya or beloved, but astonishingly his ego or ‘self’ remains. All have – ‘very feeble fabric, the gods and sages all wear it, but they have maligned it’. There is only Kabir, a slave, who wears it with such care that it remains new. Kabir considers him a slave and yet claims to be better than sage and saints. He is a siddha (attained) and also the Samadhi (meditation or mean to attain), he is a mauni (quiet) and he is the word. Neither he comes, nor he goes nor does he ever get over. He is ‘in’ all, all are ‘in’ him and yet he remains solitary. A ‘Kabir’ like this would not have considered himself less than the ‘Brahma’ (the Supreme Being). Kumar ji says that Sur, Meera and Tulsi all plead in their poetry, they consider them as poor and deprived, and in fact Tulsidas calls himself as a mean and full of vices person. It is Kabir, you will not see depravity and self pity. Kabir does not do any kind of slavery.

Kumar Gandharva is not just a singer. Kannada is his mother tongue and Marathi is his second language, but you can talk to Kumar Gandharva on any aspect of Hindi devotional poetry. His authority on Kabir is no second to Hazari Prasad Dwivedi. No one has been able to analyze Kabir the way Kumar ji has done it through his singing. We should not be surprised if Kumar ji considers himself as ‘the Kabir’ of Music. If compared with other big classical exponents, Kumar Gandharva appears taller, because he is not just a follower of some tradition.

Knowledgeable people say that Kumar ji does not sing same bandish, bhajan and folk song in the same manner.   He creates while he sings, but what’s better is that he conveys the pain and joy of creating to the listener. He makes the listener a participant in his creation.  Why does Kumar ji like Malwa? Because Malwa is a delightful region. Here the weather is neither too hot, nor too cold, nor too wet; extremes in whether are like extremes of happiness and sadness. The joy lies in being even. If he was a Rajasthani he would have longed for water. If he was a Kashmiri he would never have enjoyed rains. The kind of joy you get in Meghdoot from rains can only be experienced in Malwa. And if you have to witness Kumar ji’s sense of sound and nature of rain, then you should listen to ‘Ghan Garaj Aaye,’ the rain song or varsha geet’.

Such, Kumar Gandharva is natural – if he was not a great singer he would have been a writer, if not a writer then a painter,  – I mean in an ocean he would be a hurricane. Only a great man like him can be a Bheru ji of Malwa. A protector- Shiva of village, a village deity. People like me who are born in Malwa can say, like Wordsworth, it was a delight to be born at the dawn of freedom, but it was a divine joy to grow up in such a time, the same joy that begins with the Bhairavi of Kumar Gandharva and with a slight flick of the wrist bounces and sets in the evening sky like Thigte Cottari Kankaiya Nayudu’s sixer. No one can hit a six like CK and is there a sage (awadhoot) who can be more melodious than Kumar ji?

[The original Hindi article of this translation was written by eminent journalist late Shri Prabhash Joshi on the sixtieth anniversary of Kumar Gandharva. At the request of Musical Heritage the article has been made available by his son, Shri Sandeep Joshi. Sketch and pictures have been made by Shri Vishnu Chinchalkar.]