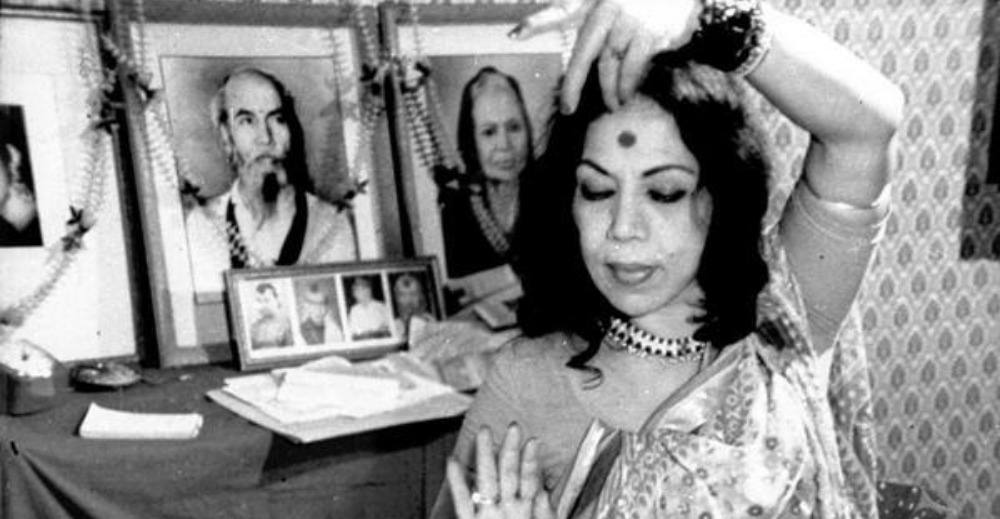 By RaaggiriApril 8, 2021Legends
No Comments

Sitara Devi will now light up the sky

When it was time for birth of the third child in the family of Sanskrit and music scholar of Banaras, Pandit Sukhdev Prasad, he specially prepared a panchang or Hindu calendar of 6 ragas and 36 ragani. He already had two daughters. The first was Alakhnanda and the second was Tara. After preparing the panchang of ragas and ragni, he expressed his desire that his third child, either son or daughter, be born according to the panchang or calendar he had prepared. In the year 1920, two days before Diwali, on the auspicious day of Dhanteras, Sukhdev Prasad ji’s third daughter was born. Since she was born on Dhanteras, she was named Dhanno.

Dhanno became everybody’s darling. Bubbly and mischievous Dhanno was growing up with her two sisters. The sound of music and dance was reaching her ears constantly. This is an incident that took place when Dhanno was about 8 years old. There was a dance drama, ‘Savitri Satyawan’, to be performed in her school. Dhanno told her teacher that she wants to choreograph this dance drama. That day Dhanno was mocked at in school. People thought how could an eight year old even think of dance choreography. But with her thoughts and creativity, and on the basis of her self confidence, she convinced her teacher to allow her to choreograph the dance drama. The dance drama happened at the decided date and time. The event got coverage in the newspaper and it was also reported that the dance drama was choreographed by Dhanno. The family was shocked! Dhanno’s father, Sukhdev Prasad, and both her elder sisters also did not have an idea that she was capable of choreographing a dance drama like this. After this was apparent, started the regular Kathak training for Dhanno. Slowly she started going to events with her father. There is another interesting incident in Dhanno’s life. Dhanno once went to an event with her family. The family, whose function she was attending, also had two daughters. One was Tara and the other Sitara. Dhanno really liked the names. She insisted her father Sukhdev Prasad that her name also be changed to Sitara. Sukhdev Prasad had no idea at that time that he was not only renaming his daughter but also a star of the future, that was going to shine and outshine all in the world of dance.

Two more incidents remain important in Sitara devi’s life. One was learning Kathak from known artists of the Lucknow Gharana like Achchhan Maharaj, Shambhu Maharaj and Lachchu Maharaj; and the other was her meeting with Niranjan Sharma, a known personality in the film industry, when she was 12 years old. Knowing both these incidents in detail is important. When Sitara Devi was about 12 years old, Niranjan Sharma had signed her for his film ‘Usha Haran’. Actually Niranjan Sharma had come to Banaras in search of a girl who is bubbly and yet had a sense of innocence in her. Plus someone who also knew the nitty-gritties of dance. In those times, the art of dance was limited mostly to the tawayafs. From the lanes of   tawayafs only Niranjan Sharma came to know that Sitara Devi can end his search. This information was absolutely correct. After meeting Sitara Devi, Niranjan Sharma felt that his search was over. In the decade of 1930 he, for the first time, invited Sitara Devi with family to come to Bombay for films.

Knowing the other incident is important because Sitara Devi took the training of dance from Achchhan Maharaj, Shambhu Maharaj and Lachchhu Maharaj of the Lucknow Gharana, but slowly she developed a technique and style of her own. With this different style of hers, she popularised Kathak in the Banaras Gharana, where a lot of emphasis was given to purity. Instead of the sounds of tabla or pakhawaj, pure beats of dance were used. It was a time when Lucknow, Jaipur and Raigarh Gharanas were more popular for Kathak. But Sitara Devi gave a unique identity to the Banaras Gharana. Sitara Devi created a name for herself very early in life. When she was 16, Pandit Rabindranath Tagore had come to one of her functions. With a white beard and a reflection of divinity that he was, Pandit Tagore called Sitara Devi to him after the function was over and rewarded her. Sitara Devi’s father told his daughter to ask Rabindranath Tagore in his regional language to give something in writing. Sitara Devi had learnt Bengali also in her childhood days in Kolkata. She conveyed her desire to Pandit Tagore and then Pandit Rabindranath Tagore honoured her with the title of ‘Nritya Samragyi’.

Another speciality of Sitara Devi’s dance was her expressions. Whenever one saw her in the role of  Durga or Kali in a paaran, it was as if one was witnessing the real avatar or Durga or Kali. The struggle of Sitara Devi was apparent in these expressions. The struggle to create her own identity, the struggle to go against the society. When Sitara Devi had stepped in the world of dance, the society had boycotted her family. The reason was clear. In those days, girls who pursued dance were rarely seen with respect and dignity. But father Sukhdev Prasad always stood by his daughters. He was more concerned for his daughters, than the society. That is why he always supported Sitara Devi. Being a Sanskrit scholar, he composed many bandish, which became very popular. The important thing related to expressions is that when this very Sitara Devi played the role of Radha Krishna, it appeared as if one was watching romance in a full moon night. At the age of about 94, a star from the world of classical dance moved from the earth into the sky to light the above. From the  entire fraternity of art and music, a tribute to Sitara Devi.

The writer Chitra Sharma an art critic. She has researched immensely on the different Gharanas of Kathak. This article is based on her old talks with Sitara Devi.

Note- We will soon publish a long and detailed article on the life and journey of Sitara Devi.