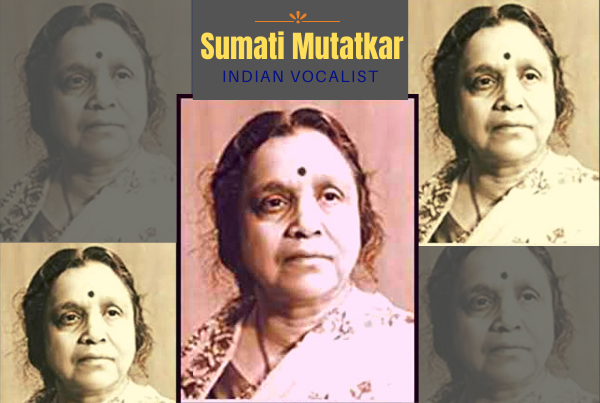 Sumati Mutatkar was an Indian classical vocalist and musicologist from the Agra gharana of Hindustani classical music.

She was born in Balaghat in the then province of C.P. and Berar as the first child of Gajanan Amberdekar, a judge, and Sundari Subedar.

She received her musical training in under various teachers primarily under Pandit S.N.Ratanjankar and later from Pandit Rajabhaiya Poochwale of the Gwalior gharana, Ustad Vilayat Hussain Khan of the Agra gharana, and Pandit Anant Manohar Joshi and Ustad Mushtaq Hussain Khan of the Rampur gharana.

In 1953, she joined the All India Radio as the director of music and subsequently became deputy chief producer of music. Later, in 1968, she joined the Delhi University as the faculty of music and fine arts, eventually retiring in September 1981 as the dean of the faculty. During her tenure, she supervised numerous research programs in the field of music as well as published several books on the subject.

She was considered a storehouse of musical knowledge and history, and was visited by many musicians who were often in search of obscure information or compositions.

She was awarded the Padma Shri in 1999 by government of India.

She died on February 28, 2007, at a private hospital in Kolkata, after a brief bronchial illness at the age of 91. She is survived by a daughter.