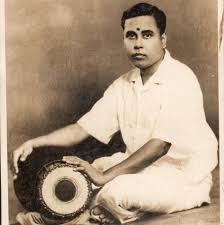 Palani Subramania Pillai was a well known carnatic music percussionist. He was adept in playing the mridangam and kanjira.

Subramaniam Pillai was born on April 20, 1908. He was born to  Unnamulai Ammal and Muthaiah Pillai, who was also a mridangist. He learned mridangam under the tutelage of his father and also had the friendship of Thavil Panchami Malikkottai Panchapakesa Pillai.

His lifestyle in the 40’s and 50’s was the envy of other musicians. Always dressed in white muslin shirts and snow white Khadi Dhoti – carefully and painstakingly groomed – he was among the handsomest among musicians (others being GNB and Mayavaram V. R. Govindaraja Pillai). Unlike many other musicians, he lived in a spacious Bungalow and owned the latest model in cars (he changed them every two years ). He himself drove the car and did not allow anyone else to drive his car.

Palani’s partner in life was Rajammal (who along with her sister constituted a popular singing duo called ‘Kolar Sisters’ in her younger days). The pair had a daughter named Vimala. She married Srinivasan and they had five daughters named Banu, Malathi, Meera, Geetha and Vasanthi. They were brought up by Rajammal after the death of Srinivasan.

At any given time at least three to four students resided in Palani’s house undergoing Gurukula system; with passage of time there were day-scholars also. Among the earliest disciple of Palani were T. Ranganathan (brother of T. Balasaraswathi) along with Ramanathapuram M.N.Kandaswami, Poovalur Venkataraman, Dandamudi Rammohan Rao, Pallathur C.T.Lakshmanan, Udumalai T.Mayilswamy, T.S Janakiraman among others. Perhaps the most famous of his disciples is Trichy Sankaran who lives in Toronto, Canada and teaches in York University as a Professor in the Music Department. Palani took him under his wings when he was a child; Even at the tender of twelve Palani enabled him to play with him (double mridangam) in concerts of Ariyakudi, GNB, Madurai Mani Iyer and others. Among his later disciples were Erode Gururajan, Madirimangalam Swaminathan, K.S.Kalidas, Cuddapah Krishnamoorthy, A.V.Ragguprasad, T.V.Gurumoorthy and many others. In turn, his disciples have trained many others and the Palani School is now well represented in India and abroad.

Till he died in 1962, Palani performed Gurupooja each year at this Samadhi on Mamundia Pillai’s death anniversary. This is the day preceding the Aradhana of Saint Thyagaraja.