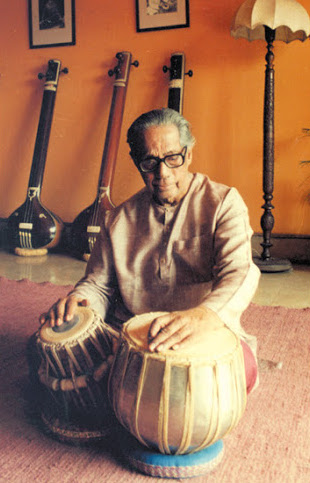 Born in a Hindu family with musical background in Kolkata. He was the grandson of Dwarkanath Ghose (1847–1928), who founded Dwarkin in 1875 and invented the “Dwarkin harmonium”, popular in West Bengal, India.[1] He graduated from the Scottish Church College of the University of Calcutta[2] He was keen in sports (he played soccer, hockey, polo and billiards). He also practised painting, but had to discontinue these due to an eye injury in a soccer match.

Then he turned to music. He was trained in vocals by Girija Shankar, Mohammed Sagir Khan and Mohammed Dabir Khan. He took tabla lessons from Ustad Masit Khan of the Farukhabad gharana and became his senior disciple[3] and later from Ustad Feroze Khan of the Punjab gharana.

He worked for 15 years in All India Radio as a producer of music. He wrote pieces in classical music, light music, modern, orchestral, choral, and percussion styles.

He was the founder of Sourav Academy of Music and closely associated with the ‘Sangeet Research Academy’. He scored music for many Bengali films, Jadubhatta, Andhare Alo and Rajlakshmi o Srikanta (1958)[4] are worth mentioning. He has composed and directed music to a number of popular gramophone records sung by various artistes.[5] A percussion entitled The Drums of India[6][7] and a jugalbandi with Pandit V.G. Jog on the harmonium and violin respectively have earned him wide popularity.[citation needed] One of his compositions was called Chaturang – involving tabla, pakhawaj, kathak and tarana. He would instruct disciples staying with him to practice late into the evenings and it is said that he would correct any errors that reached his ears.

He also provided music for the Academy Award nominated animated short Bead Game, directed by Ishu Patel for the National Film Board of Canada.[8] His residence at Dixon Lane in Bowbazar, Kolkata, was frequented by musicians, be it local or those visiting the cty, and thus was the venue of several recitals, most notably a Raga Chhayanat performed by Bade Ghulam Ali Khan in 1954.[9]

Amongst his notable students are tabla players Abhijit Banerjee, Anindo Chatterjee, and Nikhil Ghosh,[10] singers Prasun Banerjee, Ajoy Chakrabarty, Suman Ghosh and Arun Bhaduri[11] and instrumentalist Paul Grant.[12] His birth centenary was celebrated on 7 May 2012, in Kolkata, with screening of documentary of him and performances by noted singers.[13]