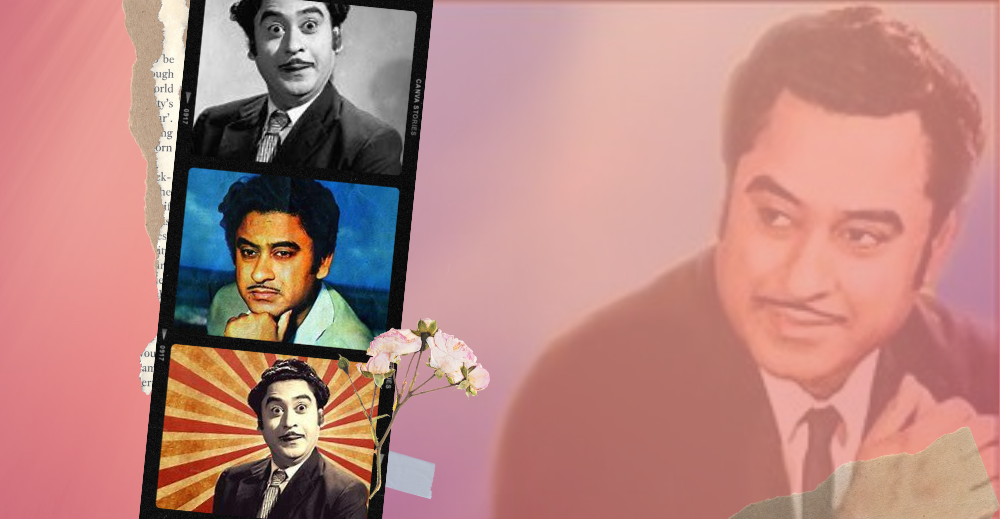 Kishore Kumar was an Indian film playback singer, actor, lyricist, composer, producer, director, and screenwriter. He is considered one of the most successful playback singers of the Hindi film industry. Apart from Hindi, he sang in many Indian languages including Bengali, Marathi, Assamese, Gujarati, Kannada, Bhojpuri, Malayalam, Odia, and Urdu.

Kishore Kumar was born in a Bengali Ganguly family in Khandwa, Central Province (now in Madhya Pradesh) as Abhas Kumar Ganguly. His father, Kunjalal Ganguly (Gangopadhyay), was a lawyer and his mother, Gouri Devi, came from a wealthy Bengali family.

Kishore was youngest of the four siblings. While Kishore was still a child, his brother Ashok became a Bollywood actor. Later, Anoop also ventured into cinema with Ashok’s help. Spending time with his brothers, Kishore became interested in films and music. He became a great fan of singer-actor K. L. Saigal, who he considered his guru, and tried to emulate his singing style.

Music director S. D. Burman is credited with spotting Kumar’s talent for singing. During the making of Mashaal (1950), Burman visited Ashok’s house, where he heard Kumar imitating K. L. Saigal. He complimented him and told him that he should develop a style of his own, instead of copying Saigal. Kumar eventually developed his own style of singing, which featured yodeling, which he had heard on the records of Tex Morton and Jimmie Rodgers.

Kishore Kumar married four times. His first wife was Bengali singer and actress Ruma Guha Thakurta aka Ruma Ghosh. Their marriage lasted from 1950 to 1958. His second wife was actress Madhubala. Their marriage ended with Madhubala’s death on 23 February 1969. Kumar’s third marriage was to Yogeeta Bali and lasted from 1976 to 4 August 1978. Kishore was married to Leena Chandavarkar from 1980 until his death. He had two sons, Amit Kumar with Ruma, and Sumit Kumar with Leena Chandavarkar. Kumar’s son Amit Kumar became a Bollywood singer in the 1980s.

He won 8 Filmfare Awards for Best Male Playback Singer and holds the record for winning the most Filmfare awards in that category.