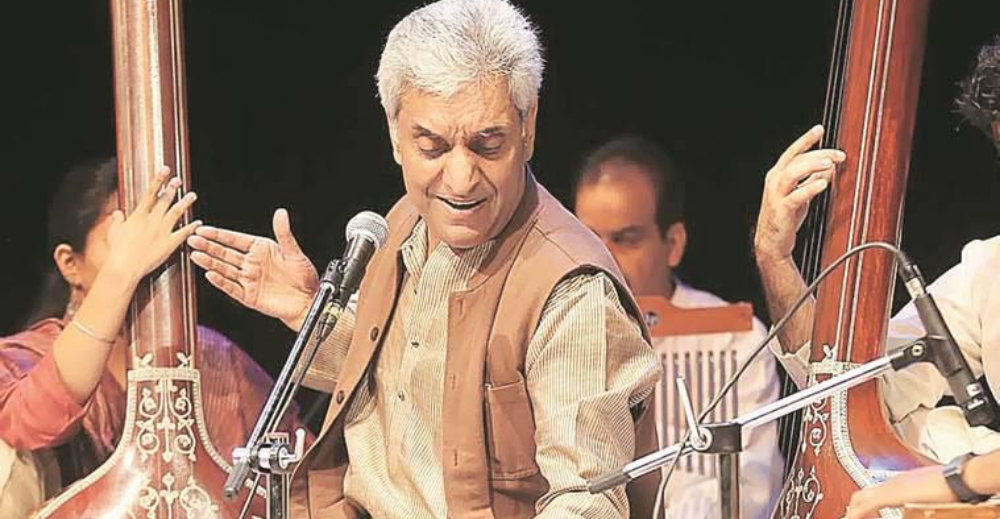 Madhup Mudgal Known as Seconds Kumar Gandharva In Their Renditions

By RaaggiriApril 7, 2021Legends
No Comments

When it comes to crooning Kabir’s verses, Madhup Mudgal only seconds Kumar Gandharva in their renditions. Keeping Kabir’s pithy and earthy style of poetry in mind, he compliments them by drawing similar tone and rhythm in his compositions. Madhup Mudgal has learnt music from Kumar Gandharva. Although his singing resembles his Guru’s style, still he manages to bring something refreshingly unique and magical into it.

Madhup belongs to the famous Gwalior Gharana. His father, Prof. Vinay Chandra Maudgalya was a renowned classical musician and music teacher. He founded Gandharva Mahvidyalaya in 1939. He was also the lyricist of famous Hindi song ‘Hind Desh Ke Niwasi’. Madhup grew up in a musical environment. During his childhood, Madhup saw his father doing Riyaaz every morning. While returning from school, he saw his mother teaching music to the students. Madhup’s father gave him, his first lessons in music. Later he was groomed under veterans like Pandit Vasant Thakur, Pandit Jasraj but his learning journey ended when he found Pandit Kumar Gandhrava. Kumar Gandhrava’s teachings have deeply influenced Madhup’s style of singing. Even today Madhup’s intonations strikingly resemble his Guru’s style.

Madhup has a deep soothing voice which strikes a chord with human soul. It’s as enchanting as the divine music emanating from Hari Parsad Chaurasia’s flute. Listening to him with your eyes closed is in itself a spiritual experience.

Madhup says that when he studied at Modern High School, he took more interest in sports and playing guitar. Although he learnt music since his childhood but it was at the age of seventeen when he started taking it seriously. Due to his father’s stellar reputation, doyens like Ustad Bade Ghulam Ali Khan, Pandit Omkar Nath Thakur, Ustad Ali Akbar Khan, Pandit Vinayak Rao Patwardhan frequented his home. The music of these scholars also influenced the inner musician in Madhup in their own unique ways. He was fortunate enough to learn treasure trove of Bandishes from them. Madhup believes that Gharana will teach you to run but when you will start running you must know all the directions. Each Gharana is like a blossoming flower in a garden therefore a musician should listen to all of them and absorb their fragrance to enrich his/her singing. He also says, listening to other singers is equally important.

Since his father’s demise, Madhup is heading the Gandharv Mahavidyalaya. More than 1200 students are learning music and dance from a faculty of 60 teachers in this reputed institution. More importantly, he pays due attention to the Carnatic Sangeet also. Madhup, himself has learnt Carnatic music and also inspires his students to learn it.

Like his great father, Madhup is also an excellent music composer ad conductor as well. He has done many musical compositions for his sister and renowned Odissi dancer Madhvi Mudgal. For many years he has been the conductor of the Gandharva Choir, a famous music group that has given performances all over the world. Here, he has composed ‘Vrind’ songs like his father. Listening to these ragas based compositions is an altogether a different experience.

Madhup Mudgal is known for Bhajans, Khayal, Tarana style of singing. Madhup Mudgal holds an M.Phil Degree from the University of Delhi for his research in the structure of Khayal. Mudgal has a unique yet interesting take on Jugalbandi (collaboration). He believes that music and its expansion is best expressed individually when you have somebody else to sing or play then one has to stop to provide space for others. Therefore, he personally doesn’t prefer doing Jugalbandis.