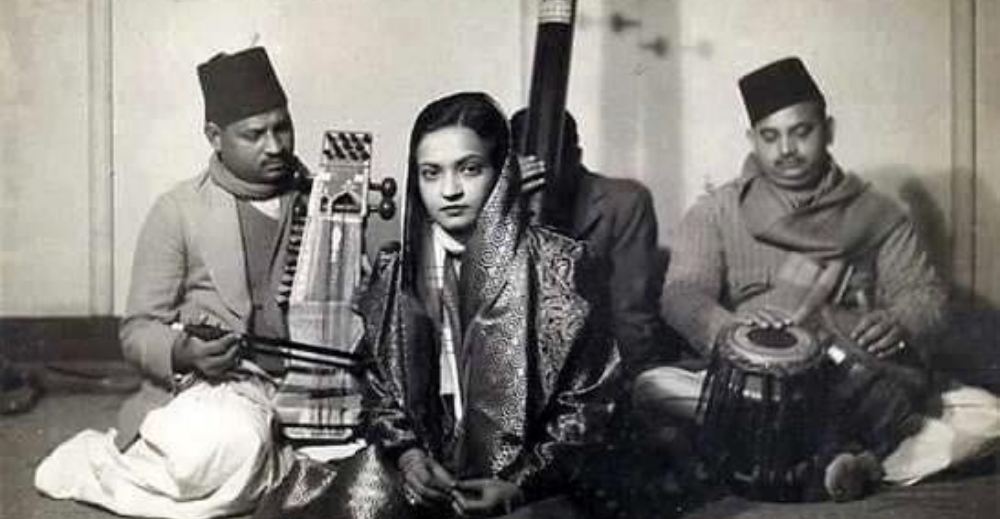 Begum Akhtar- Singing Thumri or Ghazal Is Not All That Easy

Begum Akhtar takes one into a world of music and lyrics. A singing that is adorned by ragas. Being part of the rhythm and yet freeing the lyrics from the rhythm and singing as if extending the thought. The small journey of the lyrics along with alaap and then ending like one would forget that this is how it started! A way of singing a Ghazal so unique that is unparallel and the best selection of poetry. Begum would choose her Ghazals very carefully. She would compose and sing poetry that would touch her heart deeply so that the poet’s thoughts reached the hearts of the listeners.

In one of the interviews Begum Akhtar had even said, “Singing Thumri or Ghazal is not all that easy, which people usually consider, specially Ghazals. Ghazals have a different level. While singing a lot of different aspects have to be kept in mind. A Ghazal is the voice of the heart of a poet, a unique combination of beauty and love. If a Ghazal singer can take this combination of beauty and love with his unique style of singing to the listener, only then he gets the right to sing a Ghazal.”

It was this seriousness regarding Ghazal singing that she was called Mallika-e-Ghazal. The popular poet of Urdu, Kaifi Azmi said, “A Ghazal has two aspects, one is Ghazal itself and the other is Begum Akhtar.”

80 miles away from Lucknow, in Faizabad, was born Akhtari Bai. That is why Akhtari Bai was also known by the name of Faizabadi. The childhood name was Bibbi. From the times of nawabs, there was a culture of music in Faizabad. Nawab Wajid Ali Shah was known for singing Dadra, Thumri. Bibbi was hardly seven years old when the music of plays had started attracting her. She involved herself in plays also but did not get eencouragement from family. She got her real training in classical music. On the suggestion of elders, she started learning singing from Patna’s famous Sarangi player Ustad Imdad Khan. When she was about 10-11 years of age, she went to Kolkata with her mother. There her training started with Ustad Ata Mohammad Khan Sahab of the Patiala Gharana. Ata Mohammad Khan was a very strict teacher. Begum tells us- The morning riaz or practice used to be in Bhairav raga and evening practice in Yaman. He would wake her up at 3am even in winters. Ten-eleven year old Bibbi would get up with eyes closed and a taanpura would be kept in front of her. Even when sleeping, the moment she would hear Ustad’s voice, she would get up practising.. Aaaaa aaaaa. If there was a lack of practice, Ustad would get really angry. It was this tough practice that infused magic in Akhtari Bai’s singing. Listeners lauded with appreciation!

This is about 1934. There was a massive earthquake in Bihar. An event was kept for the earthquake victims where 15 year old Akhtari Bai also reached to participate. India’s kokila Sarojini Naydu was also present in the audience. She appreciated Akhtari Bai’s singing a lot. This increased her confidence and thus began the series of recordings. Records of Thumri, Dadra and Ghazals in Akhtari Bai’s voice started flowing in the market. With growing fame came the offers of films. Akhtari Bai also acted in films like ‘Ek Din Ka Badshah’ and ‘Nal Damyanti’. But the 1942 release, ‘Roti’, became quite popular and more so for the six Ghazals sung by her in that film than for her performance in the film. The music in this film was given by famous music director Anil Biswas.

Marriage was of utter iimportance to Akhtari Bai. She returned to Lucknow in 1945 and married a famous lawyer of those days, Ishtiyak Ahmed Abbasi. This is how Akhtari Bai became Begum Akhtar. There was all that one could ask for in the family but Abbasi  Sahab did not like Begum Akhtar singing. Under the pressure of saving her marriage, Begum remained away from singing for about five years, suffering like a fish without water. Staying away from singing was as if life had ended for her. She became quiet and started staying unwell.

A singing bird cannot live in confinement. It needs an open sky to fly. Begum knew that she has to reach the hearts of millions; that she needs to sing; that she will have to sing! Finally Abbasi realised that singing is life for Begum Akhtar and keeping her away from singing is not right. In 1949, Begum returned to the world of music. She recorded three Ghazals and a Thumri at All India Radio in the Lucknow studio. Once this musical journey kick started again, it went on endlessly.

A pinch of Punjabi touch clearly showed in Begum Akhtar’s Thumri. Begum herself says that she learnt a lot from the singing of Ustad Barkat Ali Khan of the Patiala Gharana.

Begum loved and presented Ghazals with full devotion and love. Her style of Ghazal singing was so absorbing that while listening it seemed as if Ghazal itself was standing there to present itself. Because of her training in classical music, her voice flowed like water in all three saptaks.

This Thumri sung by Begum is also quite popular-

Mewari Gharana’s great singer Pandit Jasraj was crazy about Begum Akhtar. He says that while going to school, somewhere on the way Begum Akhtar’s bGhazal could be heard-

Jasraj would forget everything and sit there. Jasraj ji even says that it was Begum Akhtar, to quite an extent, who inspired him to become a singer.

After giving her voice to the greatest Ghazals by innumerable poets, and infusing life into them, Begum left this world on 30th October, 1974. But even today, songs sung by her are rendering peace into the lives of millions.