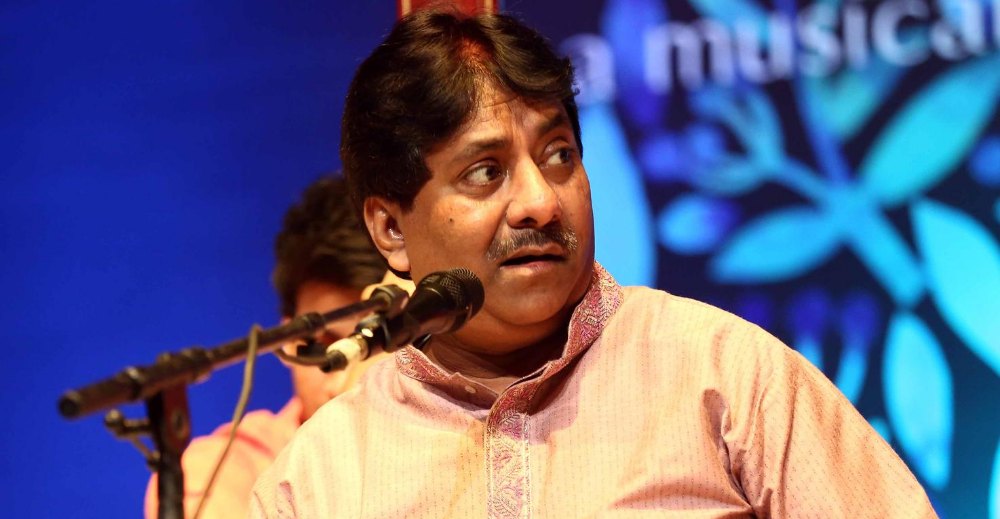 Translation English: ‘Every note of that proud man-who can’t be hidden is like a lamp’

Seeing him sing is as if, his voice is a flash of a flame’

This couplet of Momin Khan ‘Momin’ is used as praise upon the masters of the music fraternity. But those who have heard Rashid Khan of Rampur Seheswan would agree that it is a befitting expression for the voice of Rahid Khan.

This is an example of pure classical Taankari or the extended tones. Now witness the excellence for delivering expressions in Rashid’s voice.

Translation English: ‘When you will come back my love flowers will blossom’

Other than this, Rashid Khan has sung a very melodies song in film ‘Isaq’.

The film was a flop and hence the song remained unnoticed

In the movie, ‘My name is Khan’ Shankar-Ehsan-Loy also used Rashid’s voice .

Translation: ‘Only Allah is benevolent’

long before all this, Music Today had come up with a Sufi album of Rashid Khan – Naina Piya Se or My eyes with the beloved.  The album had traditional Sufi poetry of Amir Khusro composed with western orchestra. Music Director and arranger for which was, famous Sarod maestro, Pundit Tejendra Narayan Majumdar.

But Rashid Khan admits that it was the popularity of the song, ‘Aoge Jab tum Sajana’ (when you will come back my love) from the movie ‘Jab We Met’, that gave an exponential rise in the number of people who knew Rashid Khan.

Rashid is the great grand son of Ustad Inayat Hussain Khan, who founded Rampur Sehsawan Gharana. He learned the music  from his grandfather Guru Ustad Nisar Hussain Khan. Rashid Khan is the nephew of Ustad Ghulam Mustafa Khan. Ghulam Mustafa Khan lives in Mumbai and he has many accomplished playback singers like Hariharan, Shan as his disciple. It was Ghulam Mustafa Khan who recognized the talent of Radshid Khan. Rashid Khan lived and studied in Mumbai for one year and learned singing from Uncle Ustad Ghulam Mustafa Khan, but after that he went back to Badayun. Ustad Nisar Hussain Khan gave Rashid Khan tough music training in Badayun. Rashid didn’t enjoy music as much in his childhood. Nisar Hussain Khan believed in strict discipline and practice, he made the young Rashid wake up early in the morning and made him practice single swar for hours. There were days that Rashid use to only practice a single note or ‘Sa’ through the day. At that time Rashid didn’t realize the importance of such a hard work but today he admits that it is the hard work done in the childhood that is bearing fruit.

Rashid gave his first concert at the age of eleven and received compliments from the accomplished people. But Nisar Hussain Khan Sahib didn’t let the desire for stage glamour get to Rashid. In 1978 when Nisar Hussain Khan went to Kolkata as music teacher in the ITC Research Academy, Rashid joined him as a scholar with the academy. Rashid was only 14 years old at that time. In 1994 the Academy granted Rashid, an informal degree in Music. Rashid became an A grade artist with the All India Radio, in his very first audition. Since then he is spreading music to all the music lovers.

Pundit Bhimsen Joshi was a puritan in terms of Swaras or the musical notes. Praises for other singers didn’t come about easily from him. But when he heard Rashid he had said, ‘till singers like Rashid are there, pure-classical-music has bright future’. Pundit ji also sang with Rashid and gave many unforgettable moments. The credt for these dual-concerts between Pundit Bhimsen Joshi and Rashid goes to Sitar Maistro Ustad Vlayat Khan.

Impact of Bhimsen Joshi’s singing style is evident on Rashid’s style. Especially when we hear him sing with full throat and with powerful style, while singing swift and uneven Taans or long notes. While singing swift-note-singing, the clarity in Rashid’s voice is unparallel. On the other hand when Rashid sings long compositions (Vilambit Khayal) which requires spending more time with each note, his ability to stay with the notes and handling of slow progression reminds one of Amir Khan’s style of singing. Along with Khayal and Thumri Rashid sings Tarana with equal ease. Bringing out exact expressions of the composition’s meaning is Rashid’s another specialty. This ability lends freshness to his singing. While practicing traditional Raagas Rashid also loves to experiments new things in music. He has performed with many famous artists like Lui Banks, Hariharan and Talat Aziz. He has also had many performances with Sitar exponent Shahid Parvez.

Today Rashid Khan is counted among the top classical singers. He has been bestowed with honors such as Padmashri and Sangeet Natak Academy. He is quite popular in and outside the country and attract big crowd of music lovers everywhere. Rashid is a man of few words, instead his music speaks, his swaras speak, his discipline and his music speaks for him. There have been very few singers who have received as much praise from the people at young age as Rashid has. It’s true that when someone accomplishes and receives accolades early in the childhood, it becomes difficult to sustain it in the long run. But Rashid was under the right guidance, Ustad Nisar Hussain Khan polished Rashid’s talent in such a way that today his music is shining through the world.